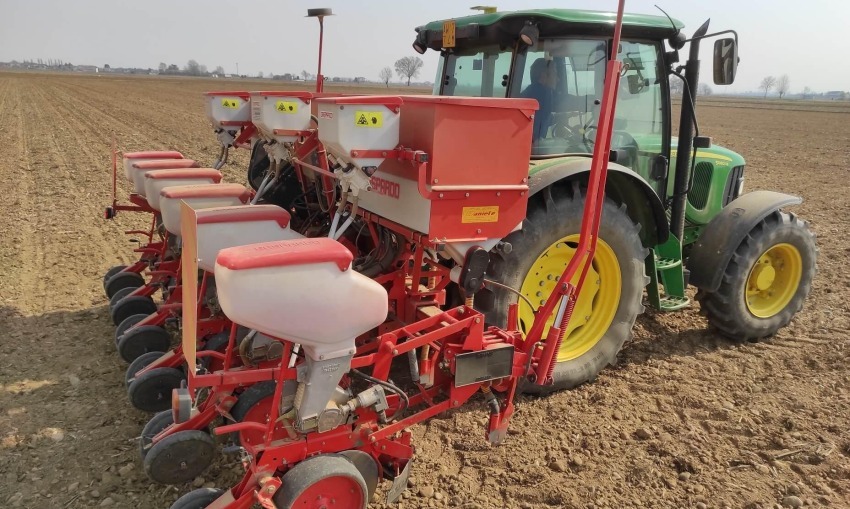 As already mentioned in the previous article, the precision seed drill is an instrument that allows you to deposit individual seeds in the ground at predetermined distances (for this reason, it is also called the single-germ seed drill).

Unlike seed drills for cereals or air drills, which distributes the seeds in a continuous flow, in the case of the precision seed drill, the seed is picked up individually by the distributor and then deposited on the ground.

What are the components of a precision seed drill, and how are the seeds transported inside?

The distance between two parallel rows of seeds, or inter-row, depends on the crop type and is typically 75cm for corn and 40-45cm for soybeans.

Each row of seeds corresponds to a distributor connected to a seed compartment which is usually mounted on mechanical support, called a "parallelogram", which allows the distributor to move vertically to adapt to roughness while always remaining parallel to the ground.

On the parallelogram, in addition to the distributor, there are "furrow opening ploughshares" which open the ground by creating a furrow within which the seed is deposited; at the end, some "tread wheels" compact the soil on the seeds, closing the furrow.

But let's see in detail how the seeds are transported from the seed compartment to the ground.

Mechanical distributors are very common in Latin America and consist of a disc parallel to the ground, with holes that constitute rotating "pockets". The seeds inside the hopper enter the disc pockets, which, by rotating, carry them to an opening through which they fall into the ground.

The “singulation” is the function whereby one and only one seed is loaded in each "pocket" by passing the disc through a calibrated slot, which allows the passage of only one seed at a time.

The disadvantage of mechanical distributors is that they require calibrated seeds, that is, with very limited variability of the dimensions. Additionally, the seeds must be treated with a lubricating coating (typically graphite) to prevent them from getting stuck or damaged by spinning the disc through the gauged slot.

The advantage of mechanical distributors is their simplicity. Unlike the pneumatic distributors described below, they do not require vacuum hoses, additional fans or other components. .

The pneumatic distributor is the most widespread in Europe and the United States. In this case, the transport of the seed takes place through the use of the pneumatic vacuum: a disc with holes of a smaller diameter than the size of the seed is rotated vertically between two chambers, between which there is a pressure difference. The seeds in the upper pressure chamber are sucked up and adhere to the disc at the holes. In the rotation path, the seeds reach an area where there is no pressure difference, at the drop pipe: here, they detach from the disc to fall into the ground.

In the case of the pneumatic distributor, several seeds may be sucked from the same hole. The selection is made through a mechanical selector, which creates an obstacle for excess seeds in the rotation path, causing them to detach and fall back into the seed compartment.

The pneumatic distributor has the advantage of being much more flexible in relation to the size of the seeds and is much more delicate in transport.

As already mentioned, pneumatic distributors require a suction system consisting of a suction fan, typically centrifugal, and a distribution system and pipes that carry the suction to each distributor. .

For which crops is the precision seed drill used?

Precision seed drills are used for those types of crops (for example, corn, soybean or sunflower), in which it is necessary to keep the distance between the seeds under control in order to guarantee germination and correct development of the plant. In fact, if the seeds are too close together, competition phenomena between the plants are triggered, which reduces the yield of the crop. Precision seed drills are also used for the sowing of certain vegetables (such as carrots or onions); however, the vegetable seeds are minute. Therefore pneumatic distributors for vegetables require mechanical measures and higher processing tolerances compared to those of precision seed drills for corn .

What are the advantages of electrical application?

At the same time, after-market systems have also spread that allow the conversion of seed drills from mechanical to electric movement. Among our customers who offer this type of equipment are Sfoggia, Mascar and Agricola Italiana.

The application with electric motors allows unprecedented flexibility and the ability to perform functions that mechanical transmission cannot provide.

Furthermore, it is possible to set the distances between the seeds without having to change the setting of the mechanical gearbox each time: this function is particularly interesting for vegetables, where it is possible to increase the density of the external rows, which are more exposed to the sun, to improve their yield.

In the case of machines with a high number of rows (therefore very wide), it is possible to compensate for the effect of changing the seeding distance in the curves: without compensation, the rows outside the curve would have more distant seeds, while those inside they will be closer. In general, using electric motors allows you to promptly control the activation and deactivation of the rows ("section control" function) to avoid overlapping sowing.

What role does ROJ Agri-Motion play?

ROJ has decades of experience in the application of electric motors to precision seed drills both as first equipment and as an after-market and can support the customer in the choice of components and system integration.

The ROJ motors were created specifically for application on precision seed drills and allow you to control the seed distributors, also managing the signals from the sowing sensors. The same motors can be used to move fertilizer and/or micro-granulate distributors, thus creating a complete tool management system.

The same engines can also be used on third-party ISOBUS systems to create variable rate systems. 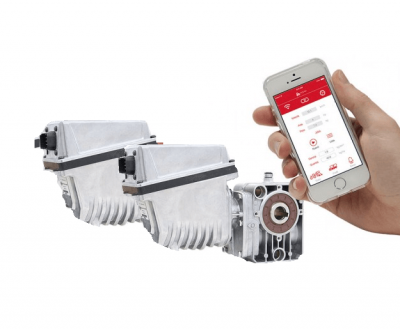 The electric motor to increase precision in sowing and fertilization in the field.